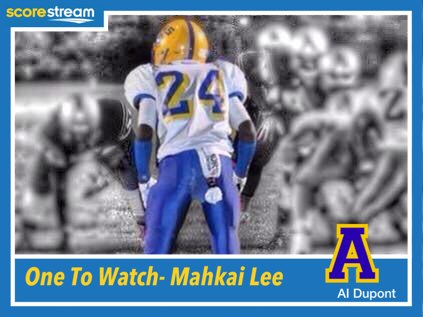 ScoreStream’s goal with Ones To Watch is to connect the high school sports fans with some of the best, most promising high school athletes in the nation. In our inaugural edition we have interviewed Mahkai Lee. Mahkai is an incoming junior at DuPont High School in Wilmington, DE. An athletic cornerback that had a stellar sophomore season; he started 6 games and averaged 4.3 tackles per game. You can follow Mahkai on Twitter @leeisland_ and check out his highlights from last season on hudl. Follow DuPont High School on ScoreStream. 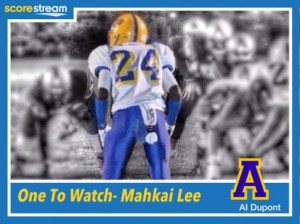 SS– How long have you been playing football and what got you interested in playing?

ML– I’ve been playing football ever since I was 5, and I got so interested in playing football because my father talked about his favorite team the “New York Jets” all the time and it got me interested in the game, and I wanted to play it.
SS– What or who would you say contributes most to you becoming a talented football player?
ML– My father and my extended family Nolimit Hurricanes Organization and Team Delaware coached by Damon Daniels and Bo Hunter.
SS– What player has most influenced the player you are?
ML– Darrelle Revis because he came from a town just like Delaware and he wasn’t the highest recruit in the nation and his play style remind me of my own, I always loved him and looked up to him and learned new things from him.
SS– Growing up, did you always want to be a CB or was there another position you wanted to play more?
ML– Growing up I always knew I wanted to play CB that was the first position a coach ever started me at and I already had a long body type that could go against a lot of receivers so  I fell in love with it and just kept excelling at the position.
SS– You’re a Tiger! If you got to choose your school mascot, what would it be?
ML– If I could choose any mascot it would have to be a lion just because they don’t fear anyone and they never give up and I always consider myself “lion hearted”.
SS– The say breakfast is the most important meal of the day. Are you an eggs or pancake sort of guy?
ML– I’m most definitely a pancake type of person I absolutely love pancakes and they never fail to fill me up.